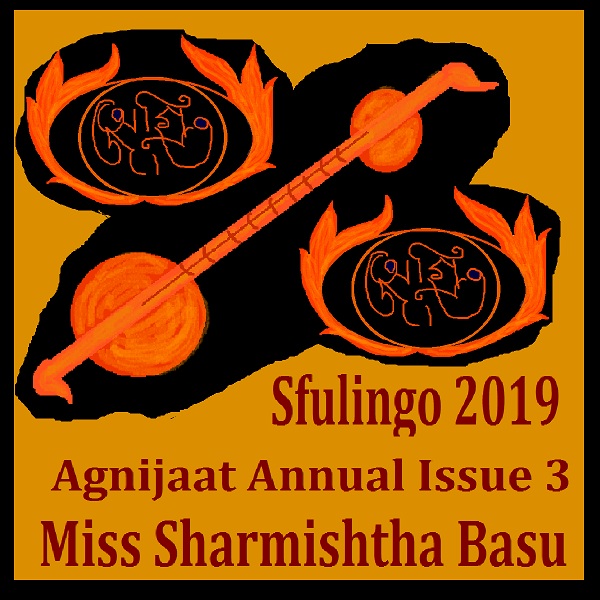 This year Sfulingo contains a set of form poems, with appropriate artwork. I have written these poems years ago, only one on each topic then I was checking them out and discovered there is so much more to say about those topics. The form I tried is called rispetto.

Form Rispetto ~ A Rispetto an Italian form which is a complete poem of two rhyming quatrains abab ccdd. Syllable count is 8 per line

Hope you will enjoy these celebrations of colours and words! I am quite hoping that!

I will love to hear from you, compliments, suggestions anything will do!

All poems and other works are copyrighted works of Sharmishtha Basu. You can share them with your friends but please acknowledge the creator. I will be very grateful for your sweetness.

A piece from the book:
That wind in my open hair
Tangling it to a knotty mess
And that attitude of don’t care
Don’t we all see that very trace?

That wild girl from novel page
Captive in every girl’s heart cage,
Scarlett O’Hara slumberin’
so eager to be born again!

This is the third annual issue of Agnijaat! Thank you for making it happen. This year the book will share a set of brand new stories that I have not published before. Actually I edited them for this book only. So if you like my stories have fun. They are of course from my favorite genre, supernatural. Some stories are dark but most of them are lighter and more pleasant. Hope you will enjoy them and please drop me a line after reading if you can! Share your views!

A piece from the book:

He quickly clambered up the tree, moving swiftly through branches and leaves he reached the spot, a sudden stink hit him. Human odor!

Last evening, everything was fine when he came here to check out the guava, it started stinking overnight? Then he noticed the red vine like thing wrapped around its stem. That must be the job of the humans that live under the tree! They tie these vines, artificial, fake but are really good for nest. They are softer than vines or leaves. Will have to tell missus about that, she loves these colourful vines! He thought to himself.

Anyways, the guava was stinking. Last evening it smelled like heaven, he was so afraid that the parrots might get the smell and eat it before he wakes up, that is why he came up so early, after spending a restless night in his hollow.

Why do these human beings mark every good fruit in the world he wondered! He decided he will ignore that stink and eat it anyways! He approached and suddenly an ear-piercing howl belted out from under the tree, he almost fell! It was one of the smaller human beings, howling and jumping, staring right at him, throwing its sticky, huge front legs all around.

It was trying to scare him, it was quite evident. He decided to run away for now, will have to return later. He ran back to his hollow and kept an eye on the guava from there and on that little human being too.

It displayed its teeth when he ran away. He knew that meant it was happy. Next it went to a bigger human being and after much throwing its limbs and babbling for long, long time settled down to eat. After some time it went inside their cave, changed its skin and came out.

Next it left the cave and went away.

He sneaked out of his hollow, looked around, none of the human were around, they were all inside their cave, he quickly went to the guava, ate as much as he could and carried a huge portion back to his hollow. He knew that the little human will return when the sun is half way down the western sky. Then it will eat the rest.

He must have snoozed, a howl woke him up, it was a familiar howl. He took a peek from behind the branches. It was throwing its limbs and jumping, screaming something in human lingo.

The bigger human being was listening to it, saying things in a softer tone but it was just howling and howling. Then it got tired and went back to cave, without even touching the guava.

Good! He thought, that meant tomorrow’s brunch! If the parrots don’t get there first! The fruit was delicious! He licked his lips. Now, will have to tell missus about the vine after finishing the fruit, otherwise she will eat the fruit when she gathers the vine for nest.

Human beings and their marking everything that they think they own! Bah! He fell asleep, hiding his little face in his fluffy, soft tail.

A bookworm transformed into an addicted writer. I love to write and illustrate them myself. By love I mean love, no half-hearted relationship, a full-fledged, passionate love, I can’t pass two days in a stretch without writing/painting (cyber), just feel empty like lovers do when their lovers are away on a tour! Even though I am thoroughly enjoying self-publishing with amazon, but if you like my work and want to publish my works in your magazine, books or better if you want to publish a book of my works please make me very happy by contacting me. Or if you want to sell my works on commission basis only!! contact me, I will be quite relieved. Honestly writing and selling your own work is a very BORING combination. So you are more than welcome! Mail me @sharmishthabasu@hotmail.com, sermistabasu@gmail.com or go to- my blog (I have 16 blogs in wordpress, all active, some on daily basis, every one on weekly basis screaming and vowing my LOVE for writing and painting- this one is first-born, so special) mydomainpvt.wordpress.com (You will get the link to my remaining blogs there) or you can check out my ezines- monthly- Agnishatdalezine.wordpress.com And Agnijaat.wordpress.com if you want fb you can go to my page facebook.com/sermistabasu, linkedin- linkedin.com/authorsharmishthabasu my email id sharmishthabasu@hotmail.com and sermistabasu@gmail.com I am in goodreads and completelynovel too http://www.goodreads.com/sharmishthabasu http://completelynovel.com/sharmishtha-basu http://amazon.com/author/sharmishthabasu I guess I said enough about myself, right? You will forget if I stuff too much here, so if you are curious to know this humble creature just join me in my blogs :) View All Posts

Troy’s store – from where you can buy his, mine and our works!